From Russian Architects to Coca-Cola Executives, Castle Truly has a Rich History. 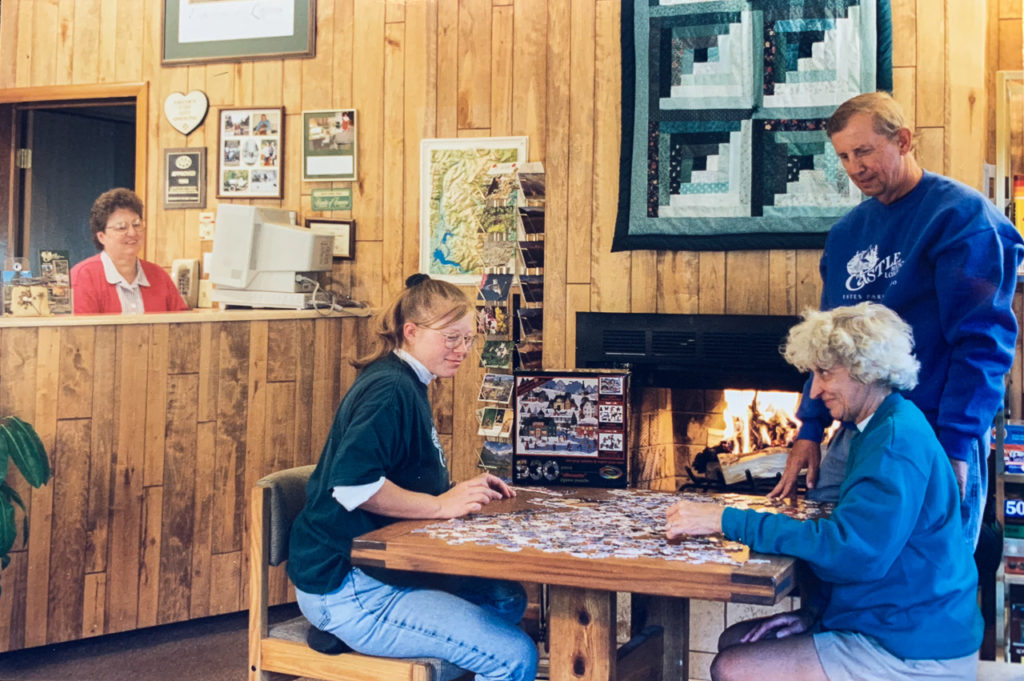 Enjoy a bit of our history here at Castle Mountain Lodge

Sometime in the early to late 1950’s, a successful and well-known Russian-born architect from New York and Florida, Igor Polevitsky and his wife Irene bought property on Fall River. The property had one dwelling — it was called Riverside. This was their start for a part‐time life and business in Estes Park when not in Miami.

Igor, his mother and sister fled to Finland from the Bolshevik revolution after Igor’s father was killed by the Reds. Despite lifelong damage from frostbite, Igor became famous for designing hotels and the “Bird House” — a design popular in Florida in the early part of the last century.

Castle River was the first new cottage to be built. A Coca-Cola executive called the cabin his summer home-away-from-home for many years.

Within a few years, five more cottages were built. Those cabins were Castle View, Castle Pines, Castle Rock, Little Pines and Little Castle. Igor also constructed a high cliff waterfall on the rock face at the west end of the property that could be seen from Fall River Road. The falls shone spectacularly at night thanks to Igor’s installation of special lighting.

Igor, a very hands-on lodge owner, loved to fish and would rise early to catch and prepare trout for his guests. A few years later, Igor acquired adjacent river cottages from Mrs. Woolworth, a Boulder, CO schoolteacher who operated her cottages in the Summer. Castle Mountain Lodge’s offerings expanded.

Water supply was an arduous job involving pumping water from the river to tanks behind the property. Igor, the leader and keen businessman he was, was instrumental in leading efforts to create city water lines to the local lodges. A committed member of the community, Igor also helped design and facilitate the construction of the Estes Park Aerial Tramway and hospital.

In the 1970s, tragedy befell Igor — he fell down an escalator and was from then on wheelchair bound. This didn’t stop him from being involved in the property and delivering newspapers to his guests. A few years later, he suffered massive burns from a fire in the bedroom and died shortly thereafter.

In the late 1970’s Jim Wenger and his wife Gerry, from Grand Island, NE bought the property. Jim, a successful insurance man yet unsuccessful candidate for the U.S. Congress, was well known. His influence brought in many friends and business associates, helping to build Castle’s guest list.

In 1984, Warren and Ruth Clinton purchased the lodge. They also owned McGregor Mountain Lodge two miles west of Castle Mountain Lodge. Warren came from a background of Corporate Law, Real Estate development and home building, and banking. Ruth’s background was in computers, having been a Systems Engineer with IBM, a project manager for Hewlett Packard, and vital part to the installation of the PARS reservation system for United Airlines.

The Clinton’s worked together for more than 20 years operating both lodges and an internet marketing business. Over the years, they renovated, expanded and updated both lodges. Sadly, Ruth passed on in 2009. Warren continued operating the lodge until June of 2018 when Chris Wood and Michael Hodges purchased the property.

Chris and Michael intend to keep the great legacy of Castle Mountain Lodge going. They own McGregor Mountain Lodge, which they purchased from the Clinton’s, and know first hand how important it is to honor the integrity of a property. Their vision is to foster further growth while maintaining the past love and care that has gone into the lodge.

An innkeeper learns that one does not really “own” a lodge like this, one is merely the steward for preserving the good efforts that have been made by many people over the prior years and we hope that when our stewardship of Castle Mountain Lodge comes to an end we will be able to hand it off to others who will carry on what the Polevitzky’s started and the Wenger’s and Clinton’s carried forward.